Ocean Carriers operating from North East Asia to Australia have announced a GRI of USD400/20’ and USD800/40’. Release date has been mixed in the market with some Ocean Carriers advising increase effective on 7 January 2014 and some on 15 January 2014.

Even though a number of Ocean Carriers have made these announcements, we will be closely monitoring the situation and ONLY on-charging whatever increases are implemented by them.

We highly recommend that you speak with your suppliers and arrange cargo movements prior to the Chinese New Year, ensuring all documents are in order beforehand.

Please be advised Australian Customs and Border Protection Service have announced the following changes to the Processing Fees commencing 01 January 2014 for Goods with a value of $10,000.00 or more. 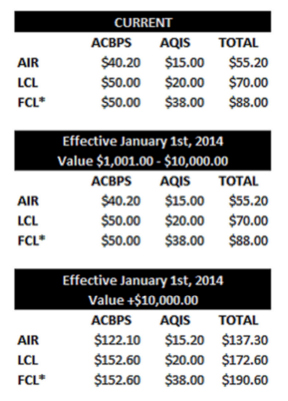 NOTE: A FCL DAFF Fee applies to the first FCL container listed on an Import Declaration.